Duff House houses an extensive Library – part of the Dunimarle Collection.   In recent years this has not generally been accessible to the public so regular “Stories” are published here to share some of the splendour of what is a really fine library.    The Stories will share some of the background, details of some of the books, information about those that made the collection, their bookmarks, their scribbles – in fact anything and everything to do with the Library!

With many thanks to Historic Environment Scotland and the Trustees of the Erskine of Torrie Institution (SC002440) for their support for this project.

If you look up “Grampus” today you will be referred to “Grampus Griseus”, a cetacean better known today as the Risso’s Dolphin – a very, very rare visitor to the Moray Firth.  However, one of the joys of a library with old books is being able to research the history to certain animals – and in the eighteenth century, the time of the start of the Dunimarle Library and Duff House, a Grampus was most definitely not a Risso’s dolphin!

DH 601 is a 1779 edition of an 8 volume set of “A History of the Earth and Animated Nature”.  The first version of this was published in 1774, with many new editions over the next 200 years.  Oliver Goldsmith was a novelist (best known book perhaps “Vicar of Wakefield”), poet and journalist, but he also published several books on natural history.

One of joys of this book is it’s illustrations, some of them resembling the animals we know today, others a bit different.  But this Library Story is focussing a bit closer to home on a beastie he called the “Grampus”.  This word has a different derivation to “Grampian”, but the Grampus, or “grand fish”, can be seen from our coasts.  Unfortunately Goldsmith doesn’t include a picture, but describes it can be distinguished “by the flatness of it’s head, which resembles a boat turned upside down”.  Still not making it clear which animal he is describing — today’s Risso’s dolphin, or something else?

One of Goldsmith’s contemporaries however was, Thomas Pennant, well known for his “Voyage to the Hebrides” (DH 2050) which took him through Macduff, Banff and Duff House, but he also wrote “Pennant’s British Zoology”, published in 1776.  For the Grampus he quotes “the color of the back is black, but on each shoulder is a large white spot, the sides marbled with black and white”.  As they can be today, he describes them as sometimes appearing on our coasts – clearly the animal we know today as the Orca, the Killer Whale (killer that is of porpoise and seals, no recorded humans!).  He also describes them as having both upper and lower teeth – the Risso has no teeth on the upper jaw!

The first picture of the original “Grampus” appears a few years later, in a letter written to Sir Joseph Banks in 1787 by John Hunter.  Joseph Banks – who does feature in the Dunimarle Library – was a key figure in the study of natural history.  A 24 foot Grampus had been caught in the mouth of the River Thames in 1759, and clearly studied in some detail, which John Hunter describes in terms of it’s skeletal resemblance to other mammals, how it’s pectoral fins resemble a human hand, how it has the same internal organs as a human.  This is a copy of the first known drawing of a Grampus – with many thanks to the Royal Society Philosophical Transactions.

There are at least two meanings of the word “Library”.  The first meaning is a room where books are kept.  At Duff House there were very grand plans for what would have been a truly wonderful library space.  The East wing, part of the original William Adam design, was to have it’s whole top floor, 80 feet by 60 feet, designated as the Library.  Of course this was never built due to the dispute between William Adam and his client, William Duff, who later became the 1st Earl Fife – who never lived at Duff House anyway! 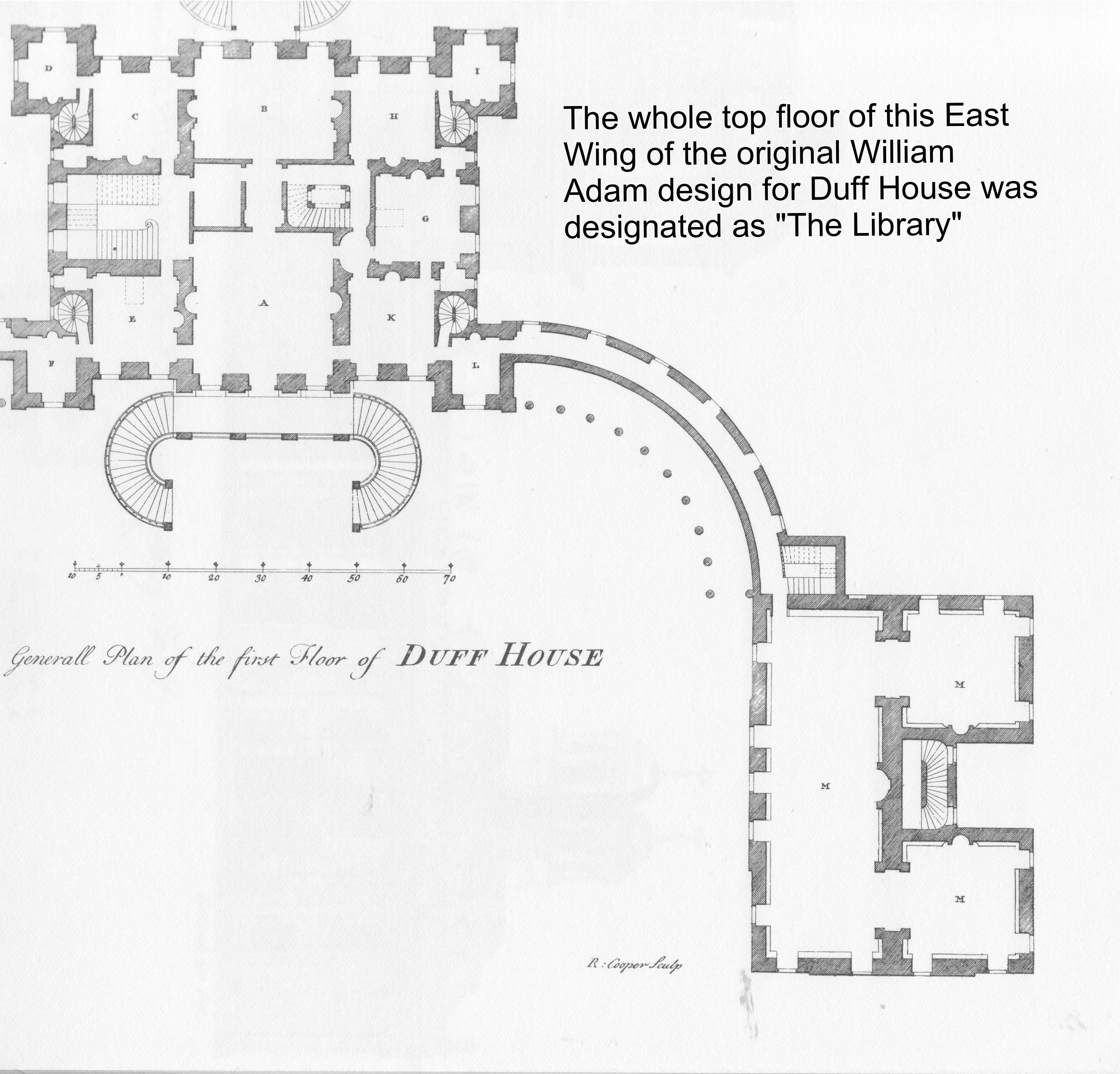 The 2nd Earl Fife, James, was however clearly – from references in his letters many of which still exist – a very well read gentleman, and he designated what we know today as the Long Gallery in Duff House to be his Library.  He certainly tried to look after his book collection and, for example, in February 1789 he instructed that the windows and bookcases be thrown open, and his large books of prints laid out for airing.  The 4th Earl was an equally avid book collector and by the end of the 19th century the Duff House Library held 15,000 volumes.

Today, the designated “Library” is two rooms on the second floor, which contains a number of glass fronted bookcases with a very fine collection within them – but not the original Duff Library!  This is because the 1st Duke of Fife gave Duff House and it’s estate to the people of Banff and Macduff in 1907 and the collection of books was taken out of the House.  When the restoration, completed in 1995, was being planned Duff House was very fortunate to get permission from the Dunimarle Trustees to allow it’s collection of furniture, artefacts and books to be installed.

The Dunimarle Library – now stored in various places in Duff House – has over 4,500 volumes collected by members of the Erskine family from Torrie House in Fife.  The Erskines thrived at much the same time as the Duffs and shared many parallels; this even extended to their names, such as William and James!  Both families were avid collectors, of artefacts, paintings and books.  The subjects covered by the Dunimarle Library are similar to those known to have been in the original Duff House Library, classics, history, geography, news, law, economics, heraldry, travel; typical subjects for serious libraries of the 18th and 19th centuries to include.  One clear – and interesting – difference was that the original Duff House Library included many Spanish books – because of the 4th Earl Fife’s travel there; and the Dunimarle family library instead has a major section on India and the far east because of John the 4th Baronet of Torrie.

Some of the key books were, perhaps not unexpectedly, the same in both Libraries.  A 17th century Bible, Hume’s 1786 History of England, 18th century works of Shakespeare, Bartolozzi engravings.  While enquiries continue for a complete list of the original Duff House collection, the Friends of Duff House many years ago completed a full catalogue of the Dunimarle Library – which can be viewed in the Study inside the House (once it re-opens) and which it is hoped will go on-line in the future.  Meanwhile all 929 Dunimarle Library books published in the British Isles before 1801 are listed on the English Short Title Catalogue (ESTC).